Remember those days when you couldn't afford games but you still wanted to play? Well, maybe you didn't, but I was one of those kids and getting your hands on pirated games was quite easy. Back then the "warez scene" was full of groups like CLASS, Fairlight, Myth, Razor1911, Skidrow, DEViANCE etc. which would compete against each other in releasing the newest games.

Often the games were released with a installer like one of these:

Amongst .NFO-file and the game, splitted into 50 or more rar archives, there was also music included - chiptunes - and sometimes I let the installer run just to listen to the music.

Check out this player with my favorite chiptunes (just click the song titles to play them):

It's powered by Chiptune2.js (which again uses libopenmpt and enscripten) to play MOD files directly in your browser, you can download all of the songs above and some extra ones here (zipped).

Module Files originate from old Amiga MOD files and are nowadays used in a format like .mod, or .xm. The cool thing is, due to their structure, they are only about 15 KB each! Most songs here are from Maktone/Martin Nordell, a well-known name in the cracktro scene, he's contributed to many of those releases. (Here's an interview from 2002 in which he shares some detail about himself.)

To play them, you'll need either a module file player like Open Cubic Player or of course, also VLC can play them. There are also tools to compose and edit them, like Milkytracker. MOD files typically consist of 4 channels (standard .mod-files), for example Class01.mod: 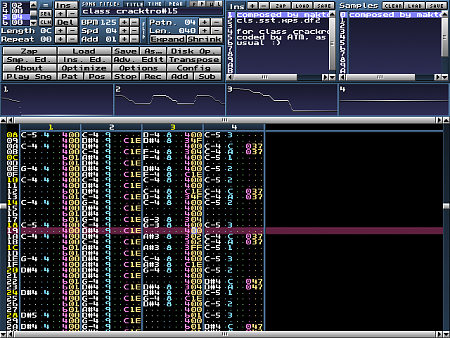 You can even see tone heights (like C-4 and G-3), and that the player repeats a certain set of sequences. If you'd like to learn more about composing chiptunes, have a look here.

By the way, if you like that kind of music, be sure to check out the game VVVVVV (Steam link), which has an awesome chiptune soundtrack (named PPPPPP): 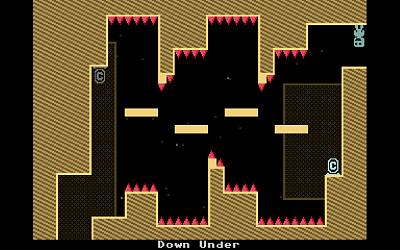 (It's fun, but be prepared, the game's so difficult there's a Steam achievement for finishing it with less than 500 deaths :-)

Enjoy, and thanks for reading!