Last week I had a conversation with a friend about addicting games, and it reminded me of a a game I often used to play at school. I even made a video then, in which I wanted to reveal the "secrets of the pro's" :-D (I was 19 back then, so I guess that's okay...)

But what I also realized is that it hit 50k views this week, hooray!

The game basically is a skater game where your goal is to score as much points as possible by gaining speed, do some crazy flips and tricks and trying to land savely. Just with a dolphin :-) 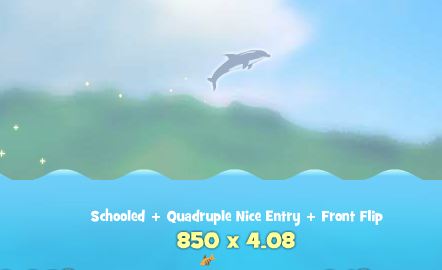 And to make it even more surrealistic, you can jump up to certain planets and stars, and do a "starslide". There's even a nice reference to the Restaurant at the end of the universe from Hitchhiker's Guide to the Galaxy.

Here's the video if you want to take a look:

You should give it a try at Rawkins Games.