Some time ago (it's been over four years!) I posted my bejeweled-bot, a simple bot for cheating in the Facebook game Bejeweled Blitz. By simulating mouse moves, it gets a pretty high score by some very basic strategy.

I was asked later on for a detailed writeup so I'd like to point a few things out about how to write a bot which plays a game. I actually was surprised that it still worked after all this time :-)

I tweaked it a bit (it's now optimized to run on OS X) and was able to push my highscore up to 4.5 million (with use of "Chronostone", a rare gem):

As a really basic strategy for any bot, it loops over the following steps, which is similar to how a game works, like the famous game loop:

But before we can get into the game loop, we have to do some preparations, like recognizing where the game window is. We relate on the pixel coordinate system of the screen, which starts in the upper left corner.

Because screen sizes vary, I decided to write a very simple, pixel-color based recognition, which starts at 1/3 of the width and 1/2 of the height of the screen, so putting the window anywhere where it touches one of those lines will just be fine. Window recognition works as follows:

So we have the game window and know where everything will be, where the buttons are to click and where the gems will appear. Next up is recognizing which gems are on the playing field, which appears to be non-trivial to get 100% right. As the board will be constantly changing with every move we don't need a perfect match and also a 90% will do, so I just went with simple color recoginition for distinguishing between gems.

I took a fixed point at every gem and collected RGB samples from there, for later to match them with the color identified:

Here's a simple output map of colors and their category:

Notice how in the loop below, there's a check if the color provided is anywhere near one of the known colors (up to 60 points near to it over all three values). Even with this threshold not every color is recognized, for example during ongoing visual special effects: 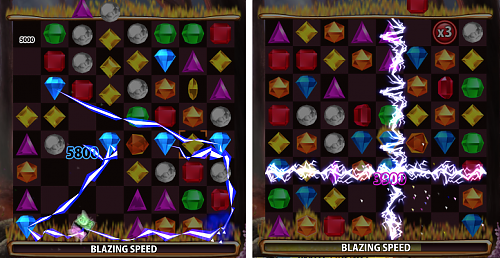 Here the colors are much darker than in normal mode, so for a few seconds, the algorithm is "blind" and no gems are recognized. Several other difficulties include moving/falling gems, special gems (from combining 4 and 5 gems), burning gems, score points in front of the board, explosions, fire and special effects, like on the following board: 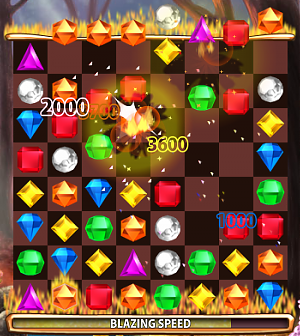 After analyzing the board and how the gems are arranged, the hardest part is already done. Now we just need to build some simple rules for moving the gems into position:

A simple move where the middle gem is missing

Autopy is a great help simulating input, and the methods in the script for moving the mouse or clicking are just wrappers for the autopy methods, including some pause so all inputs will be accepted.

Also, timing is crucial when it comes to optimizing the game loop. When the board is analyzed, several moves are detected, but maybe it's not helpful to execute them all, because each move can change the whole board and the move would no longer be helpful or even valid. A common value I found out that works is 5 moves, but you can try other values at the beginning of the script:

Another bottleneck was the screen capture time. Autopy was fine on Ubuntu and a relatively small screen, but on Windows with a Full HD 1920x1080 taking a screenshot would take about 0.3 seconds, which is to long to run the script continuously. I updated the screenshot part according to this StackOverflow answer so it is now optimized for Mac OS X. For Ubuntu, I think Autopy is still the best choice, and I did some timing with pyscreenshot for Windows, but unfortunately it seems to be too slow.

At last, it's important to give back the control to the user as soon as possible. There's a maximum runtime (defaulting to 70 seconds) after which the script will stop running, but you may want to extend that to 150 seconds or more when using special gems, because they will slow down the gameplay, allowing to play longer than the original 60 seconds.

Not only time, but also some predefined value (taken from the game) will make the script stop, or if the board is suddenly empty (or no gems have been recognized), as it is the case when the browser window changes or the game is finished and some popup appears.

It's still not 100% safe (if some message from your operating system partly overlaps the game, it might not be recognized), but in most of the cases it will stop. If not, you'll have to sit through 70 seconds watching the script trying to click frantically without being able to do anything :-)

The code, as always, is available on my Github page: https://github.com/akleemans/bejeweled-bot 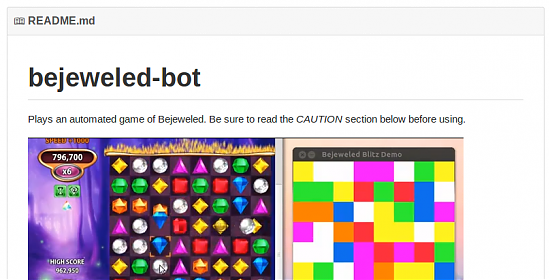 With under 200 lines of Python, one can write a fairly good bot which achieves scores of over two million points (with some special gem).

In general, it's quite easy to write a Bot for a game, especially when certain conditions are met:

More complex games like Angry Birds require much more sophisticated algorithms for both recognizing the situation and even more for performing a complex action and I don't think someone has tried to write a bot for it, although it would be surely possible.