So I just went to see Looper, a dystopian time-travelling scenario in the near future. It stars Bruce Willis, and, what's even cooler, Joseph Gordon-Levitt (Inception, wohoo). They play the same person, just at a different age.

Spoiler alarm: In case you want to watch the movie, don't read any further. As expected it's really worth watching :) 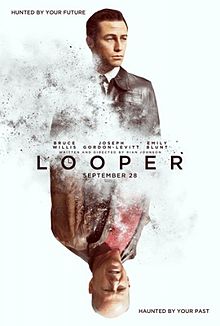 First of all, the revelation at the end is one of the best film endings in the past year and I reeaallly enjoyed watching the movie. Although it's a bit hard to explain to a friend, the story line is quite reasonable but it keeps your mind busy for a moment :)

However, whole story is based on one key event, the moment where "old Joe" Bruce Willis meets "young Joe" Joseph GL, and there the story splits into two separate timelines.

First we see how young Joe fails to kill his older self, old Joe flees, and in the moment he is falling out of the window at his apartment, the other alternative is suddenly shown (no idea why), and we see old Joe shooting old Joe.

The story then goes on, he goes to Shanghai, meets his wife, and eventually, after 30 more years, is being forced to "close the loop", to go back in time to let shoot himself, which he can prevent, and we're on the other timeline again.

See what's missing here? Each outcome of that one moment makes the other become impossible. To sum it up: If Joe shoots his older self, he has a fairly meaningful life in Shanghai, then travels back in time after 30 years, and gets shot (as stated in the beginning) ==> end of the story If Joe lets his older self escape, the implication is that he didn't get his life in Shanghai he wanted in the first place, didn't meet his wife, and in that case wouldn't want to kill that rainmaker boy when he's back in the past (maybe didn't even want to travel back, because there's no wife, at least not the one in Shanghai). That too makes the story different than it is told. Young Joe would had to live his life from first time on with old Joe (himself), because he didn't shoot him. When we think of time as a linear thing I imageine it something like this (the continuous lines represent Joe's life, the dotted ones time travel): 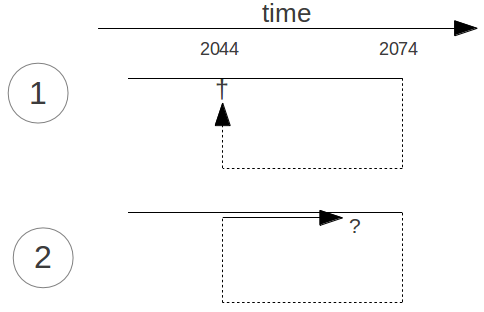 (Feel free to troll if I'm missing something.) I still think it is a very good plot, maybe there really is no possibility to resolve such issues which arise from time travelling :)