For quite some years I've taught myself to solve the Rubik's Cube, over and over again. And I've solved it literally hundreds of times; The problem was that after every few months, I just forget how to do it. The first few steps I manage to do by intuition, but for the rest, I just forget the whole algorithm part. 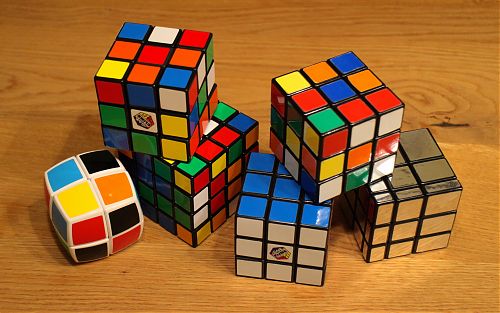 Some of my Rubik's Cubes

I tried some different methods, starting with the Beginner's Method, working my way into the more complex ways to solve the cube, ending at some tutorial with the following statement:

OLL: There is nothing in this step except learning 57 algorithms for 57 cases. (Link)

I then realized a simple fact: Solving the Rubik's Cube isn't that hard, but memorizing algorithms is, at least for me, and especially keeping all those algorithms in memory. I also realized that for me, as an occasional cuber, it would be more important to just be able to solve it, even if I didn't do it for some months or years.

After the maybe 10th time I decided I needed some special recipe, specifically tailored to fit my needs:

So that's when I decided to create my own, customized sequence of steps for solving the cube and made a recipe for me to reduce the algorithms and being able to memorize them.

It's somewhere between this very simple method by Badmephisto (only available as WebArchive backup) and the little more sophisticated approach of Jasmine's Beginner Method.

On a high level, I'm using the CFOP-method (popularized by Jessica Fridrich), which means we don't solve the cube side by side, but use a layered approach.

The steps are as follows:

To understand the algorithms, you'll need to understand basic cube notation, but only the real basiscs, e.g. L R U D F B and that ' means backwards.

The beginning is always the cross on the first, white layer, extending to the middle layer. If you tried solving the Rubik's Cube before this should be easy to do by intuition, and after this first step you should have something looking like this: 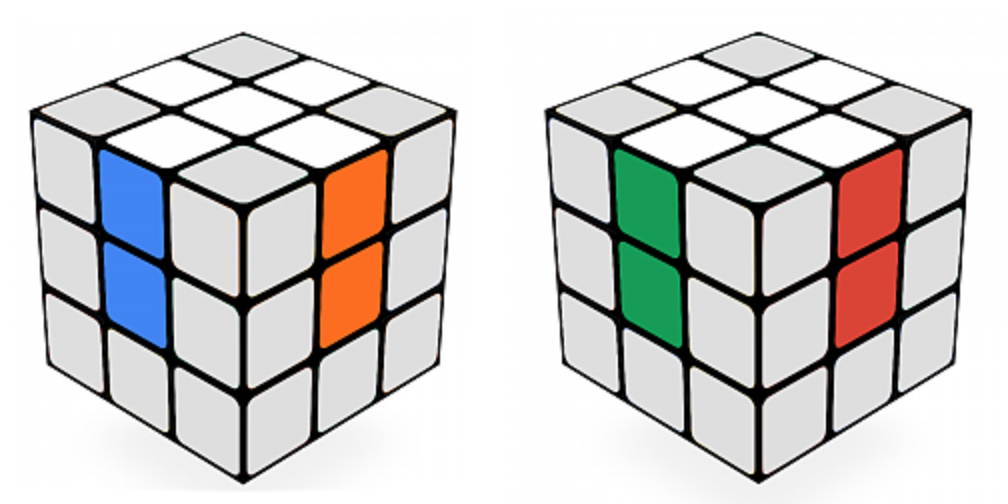 front and back of a solved cross

After this step, the white side is turned down and everything from now on is done from this new point of view.

The first two layers are most time-consuming, even for real speedcubers. I decided to take the approach where we first allocate the two missing pieces, bring them together and then put them into place in the correct slot. (Opposed to the approach where you first bring the corner into position and then the middle piece, which I think is far even complicated.)

If you do this often enough, this should be manageable to do by intuition. I'm not going to focus on this here, because it's really individual how you're approaching the solving by intuition, and also because it takes some time and practice to really grok it.

For some practical tips and inputs have a look at this video tutorial (which is one of few being reasonably slow):

The big advantage of learning to solve F2L by intuition is that it's nearly impossible to forget! Even if you're missing some parts you can re-learn it really quick by practicing.

Now to our first algorithm. Hooray! We have the first two layers and want to build a cross, like in the beginning, except now we only care for the orientation of the last layer, nothing else. 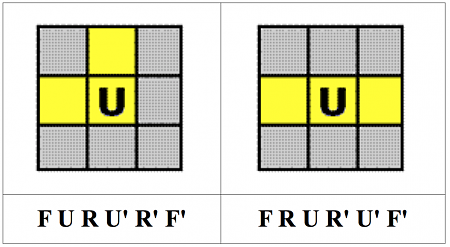 I memorized this as always starting with the front side F, then R and U in the middle, first normally and then backwards, and at the end move the front backwards again. To distinguish between the two cases above: If it's a line, break that line by first moving R, else first move U, everything else is the same.

Oh, and if there's only the center of the face yellow, do one of them at random and you should get a state from above. Then do the appropriate one to complete the yellow cross.

OLL corners - "The Twist And Turn"

Next up is a neat little algorithm which I memorized by "twist and turn". It's really simple if you take apart the two hands: Your right hand just moves up and down, simple as that. Your left hand just turns the uppermost layer clockwise - two times one turn, and the third time two turns to complete a full rotation.

For the second algorithm on the right, just do the same for the right hand, but start at the end and move anti-clockwise with your left hand.

This was the most difficult algorithm for me, and needed a good technique for memorizing. The start is on the right, like all the other ones except for the first one. Then, it gets quite simple: Just go back and forth between the back and front (over the right side) until you're finished. This was my main insight for remembering this one. 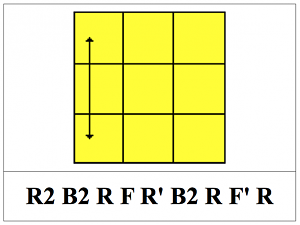 There are some other helpful observations: 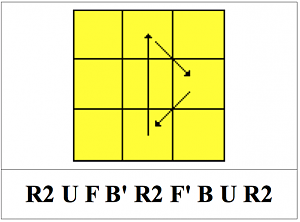 This one is my favourite algorithm. Partly because it's the last one and after that you're finished, but also because you can hold the middle while turning.

You prepare with R2 and U, and then the F B' part happens, where you can turn the sides to the right. After a quick R2, you can turn them back with F' B, and you're nearly done. I call this one the whopper because the rorating sides with the stable middle always reminds me of a hamburger :-)

It's possible that you'll have to repeat this one, if all four edges on the last layer are incorrectly placed. If this is the case, make sure to think of how they're going to be aligned after you do it once.

That's all! 4 algorithms (partly with some second variation) are enough to solve the cube, keeping the amount of moves to memorize really low, but also enable you to solve the cube within 2-3 minutes with some practicing. I encourage you to give them some silly names yourself as they will stick far better that way :-)

Here's a cheat sheet with the moves: 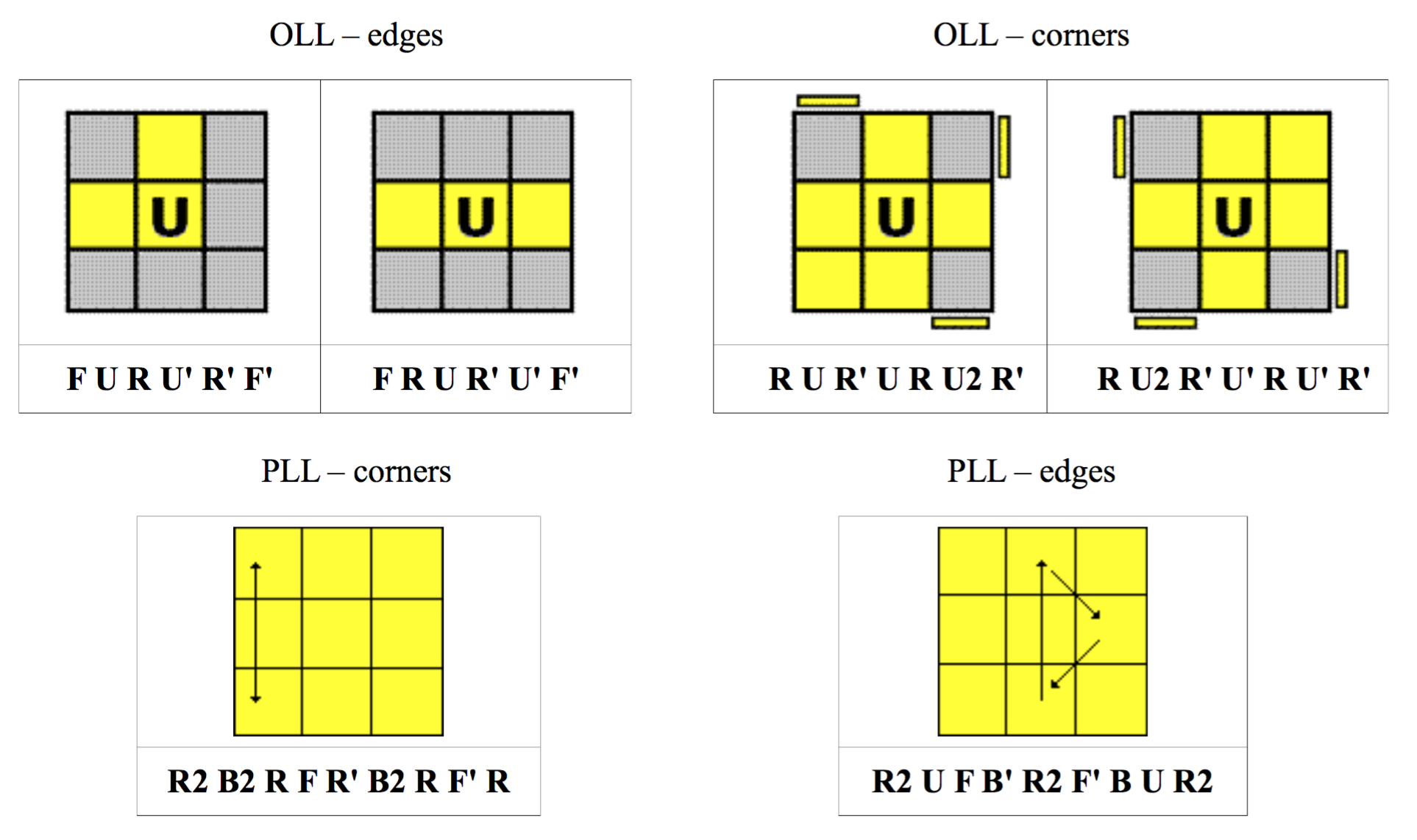 You can also download a printable PDF here: cube_solving.pdf.