Recently I had to write some SQL to connect some CIs (for example, servers) with their parent applications. The crucial point was that there could be arbitrary many layers of applications above the server. 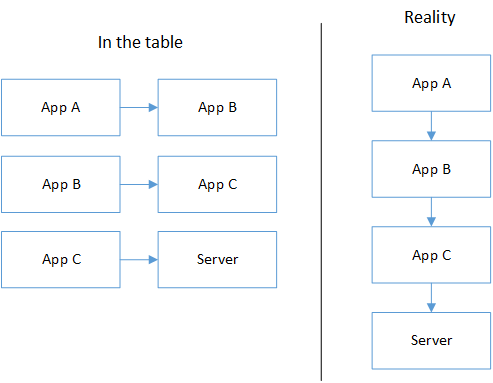 All the relations are in the same table, so there's not really an indicator on which hierarchical level an application is until you search for more relations to other connected applications. Technically, the goal was to join the table by itself n-times, whereas n may be different for each entry: 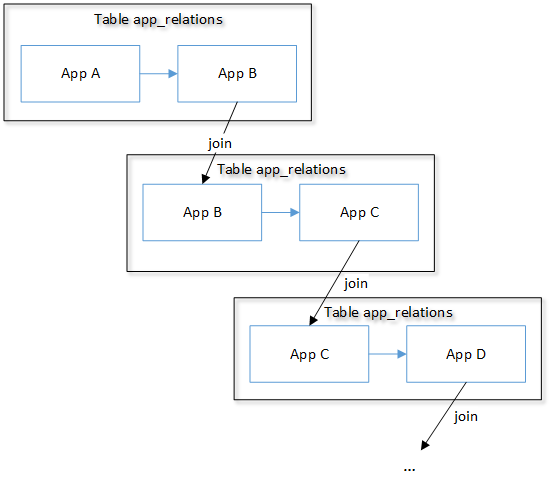 As this is not possible by simple joining, I had to find another way to connect the different applications with each other. Let's start with a simple table with 11 relations:

As you can see App A is the root node with its children (App B, App E), which again have their own children.

To query the table recursively, one can use Oracle's CONNECT BY, and connect the child_id with the corresponding parent_id:

With CONNECT BY ... PRIOR the chaining is initiated, connecting Applications who are a child and a parent at the same time at a different place in the table.

This will result in the complete list of existing relations, complete with root_id, path and also a depth for each relation, indicating how many nodes have been found: 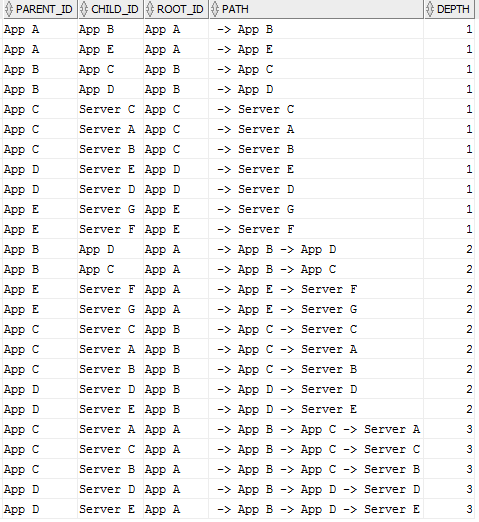 Quite some paths found! As you can see, also incomplete paths "in the middle" are shown, for example App B → App D, a path which misses the root node (App A) and also the leaf node (Server D or E), but is nonetheless a valid path.

Now we have all relations from our root node, and we can as a last step just take those which end with a server:

Using the jQuery plugin jsTree and a little helper library we can generate a clickable Javascript tree:

For further reading and some nice examples of CONNECT BY have a look here.