A bitcoin wallet is a "place" to store Bitcoins. I say "place" because it is not actually a physical place but solely defined by a private key, which is used to sign transactions. So anyone who knows the key has complete access to the wallet.

So, is it possible to brute-force a private key for a wallet?

Spoiler: No, not really, that's part of the "mathematical security" Bitcoin offers.

The creation is sometimes also done via choosing a series of words, like for Electrum, where a "wallet seed" contains of 12 words from a list of words, which also can be written down on paper. It can then later be used to re-create the wallet and gain access to the Bitcoins, even if the original PC is not around anymore.

While reading some related articles I stumbled on a StackExchange post, and an answer on a similar question got me thinking:

It is possible to brute force some Bitcoin addresses, because some people generate their private keys in an insecure manner. Any (non-zero) 32 bytes can be a private key. So running sha256 over a passphrase gives an apparently random, but brute force-able private key.

So, why not just try that?

This is what we need:

Getting all addresses with a non-zero balance

First, we'd need a list with all current addresses with a balance. Anyone with a up-to-date full node of the Bitcoin network already has it, and luckily, there are people sharing that data just in the format we need. For example, you can download an up-to-date list here, it will be around 1.2 GB currently (zipped).

Next up we need a list of common passphrases. As there are many such lists available I'll just go with one from the NCSC (UK), available via a web.archive.org-Link.

It contains entries such as:

To get a private key from a passphrase, we need to calculate the SHA256 digest. This is easily done using hashlib:

Next, we want to create a Bitcoin wallet using that hash. Luckily we don't have to go through wallet generation ourselves, but there is also a library which does the heavy lifting, bitcoinaddress:

This will generate a wallet with the most basic information, and also some pre-generated public addresses, which we can use to check the list later:

So, now that we a public address, we can just search the list of addresses, right? Unfortunately, searching 1.7 GiB of text (uncompressed) takes a really long time, so we need to speed that up.

Using bisect_left() from bisect on a sorted list of addresses, we can use a bisect search, meaning that we just keep cutting the list in half until we find (or don't find) the address we're looking for.

After letting the script run, there is currently no balance on any of the widely used passwords.

But when first preparing this blog post, there was actually a match: 777!

You can see the balance here: 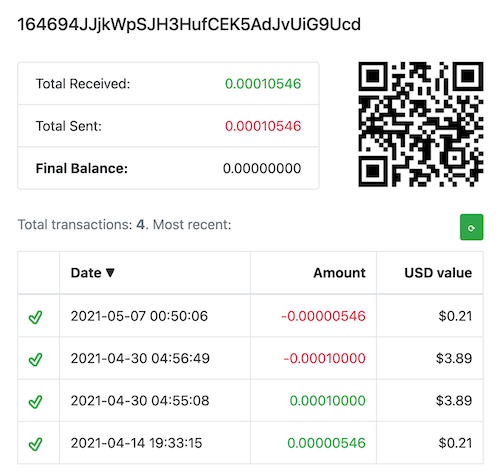 You can see that it had a balance of about $4 in April last year.

When I first saw that, I literally wrote:

The balance is so low though, that even if someone decided to steal it, it wouldn't be enough to pay for the transaction fees.

Apparently I was wrong! I had in mind that transaction costs for Bitcoin were about $20 back then, but somehow somebody was able to transfer it to another account.

Anyway, it was interesting to see that all it takes to access an account is really one long number - and if that is generated in an insecure manner, it doesn't take much to get to a private wallet key like shown above.

All the code can be found here.